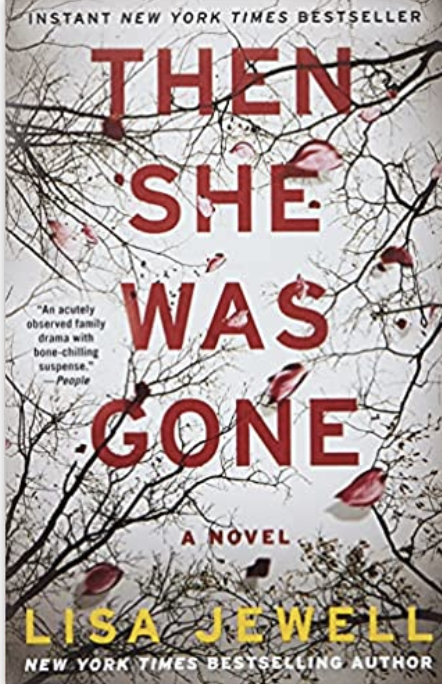 Summer may be over, but our book club is still going strong! And if you need an escape from the reality of back-to-school, here’s hoping this most recent thriller did the trick.

Have no idea what I’m talking about? Check out this blog post before reading on.

In August we read Then She Was Gone by Lisa Jewell.

I’ve heard great things about this author, but had never picked up one of her titles. This was the first book I’d read by her, and let me tell you, it absolutely will not be the last! Her writing is downright addicting!

DO NOT READ ANY FURTHER UNLESS YOU’VE FINISHED THE BOOK!

Haven’t read the book yet? Grab it here.

Ellie Mack was the perfect daughter. She was fifteen, the youngest of three. She was beloved by her parents, friends, and teachers. She and her boyfriend made a teenaged golden couple. She was days away from an idyllic post-exams summer vacation, with her whole life ahead of her.

And then she was gone.

Now, her mother Laurel Mack is trying to put her life back together. It’s been ten years since her daughter disappeared, seven years since her marriage ended, and only months since the last clue in Ellie’s case was unearthed. So when she meets an unexpectedly charming man in a café, no one is more surprised than Laurel at how quickly their flirtation develops into something deeper. Before she knows it, she’s meeting Floyd’s daughters—and his youngest, Poppy, takes Laurel’s breath away.

Because looking at Poppy is like looking at Ellie. And now, the unanswered questions she’s tried so hard to put to rest begin to haunt Laurel anew. Where did Ellie go? Did she really run away from home, as the police have long suspected, or was there a more sinister reason for her disappearance? Who is Floyd, really? And why does his daughter remind Laurel so viscerally of her own missing girl?

When I say that I was addicted to this book from the moment I picked it up, I’m not kidding. It only took me three days to finish it! Which is fairly fast, considering I’ve been swamped with work and I’m responsible for two little ones!

It wasn’t necessarily the plot that kept me going at first; that all seemed fairly figured out right from the jump. I just found the author’s style of writing very conversational – it had a nice flow to it that made it very easy to just keep reading. I became invested in Laurel’s life and the intricacies of her relationships.

Were you hooked right from the beginning? Or did it take you some time to become interested?

So many questions about the mystery at hand – the disappearance of Laurel’s daughter Ellie – are answered right away. For instance, Noelle is introduced fairly early on, and it’s made clear that she had something to do with Ellie’s disappearance. Did you find this deterring? Or where you compelled to learn more about the why?

For me, I’m always intrigued by the hint at a lady killer; it’s a nice departure from the tired, overused cliche of psychotic men doing psychotic things.

In real life, lady killers are so few and far between, and seem to almost always have something to do with being jilted by a lover. But by the way that the author paints Noelle from the start, she doesn’t seem like the type to have a lover. Truly, I pictured her as an older, loony cat lady. I never pictured her with a lover, so although I knew she’d done it, I couldn’t figure out why she’d have something to do with Ellie’s disappearance. And perhaps that’s what the author wanted – to force the reader into a place of underestimating Noelle.

When the truth about Noelle’s motive is finally revealed, I was intrigued, because again, I just did not picture Noelle as the needy, desperate lover. But as she explains the evolution of her relationship with Floyd, it all began to make perfect sense. I saw it then, and I quickly wondered how Floyd fit into the whole dynamic. Had he discovered Ellie in the basement and killed her himself to keep the secret? Had Noelle killed Ellie in a fit of rage and Floyd helped cover it up? Had Floyd wanted a perfect child so desperately that he would have gone to those lengths?

When Noelle first revealed that she’d chosen Ellie to save her relationship with Floyd by having a child, did you wonder to what extent Floyd was involved? What did you think his role was?

As the novel came to a close, I felt myself full of hope and positivity about Laurel and Poppy’s future. For Laurel, she’d spent an eternity grieving the loss of her child, and inadvertently pushing the rest of her family away.

But with the closure she receives from burying Ellie’s remains, coupled with the understanding of what actually happened to her daughter the day she never returned, it seems like she might be able to move forward with purpose – not dredging on like a zombie.

At the end of the book, Laurel notes that she “hasn’t told Poppy the full truth” about everything that happened. Do you think she ever will? What do you think about her decision to keep some of the truth hidden? How would you have handled it if you were Laurel?

And then of course, there’s the epilogue, where we hear the final words of Ellie herself, and we learn more about her emotions in those last moments. It felt like the perfect ending to me, and I found myself shedding a tear at the idea that this young girl who had endured so much still viewed herself as brave, brilliant and strong.

I can’t imagine being the victim of such a confusing crime, giving birth in captivity, having my newborn snatched away from me while I listened to her cry from afar, all the while knowing I was dying. And despite it all, she maintains her sense of self, and doesn’t succumb to destructive, negative thoughts about who she is – something that I think is extremely common for victims to do. It’s surprising even more so, given her conversations earlier in the book, where she points out that she should have seen it coming, she should have done something different.

What did you think about Ellie’s final words?

Hey kids! Just a heads up that this post may contain affiliate links to products I love and use. If you take action after clicking one of these links (i.e. subscribe, make a purchase, etc.) I’ll earn a bit of a commission, which helps me keep this blog up and running – so you can keep finding dope recipes like this one to recreate yourself! Thanks in advance for supporting The Northeast Ginger – xoxo Gossip Girl