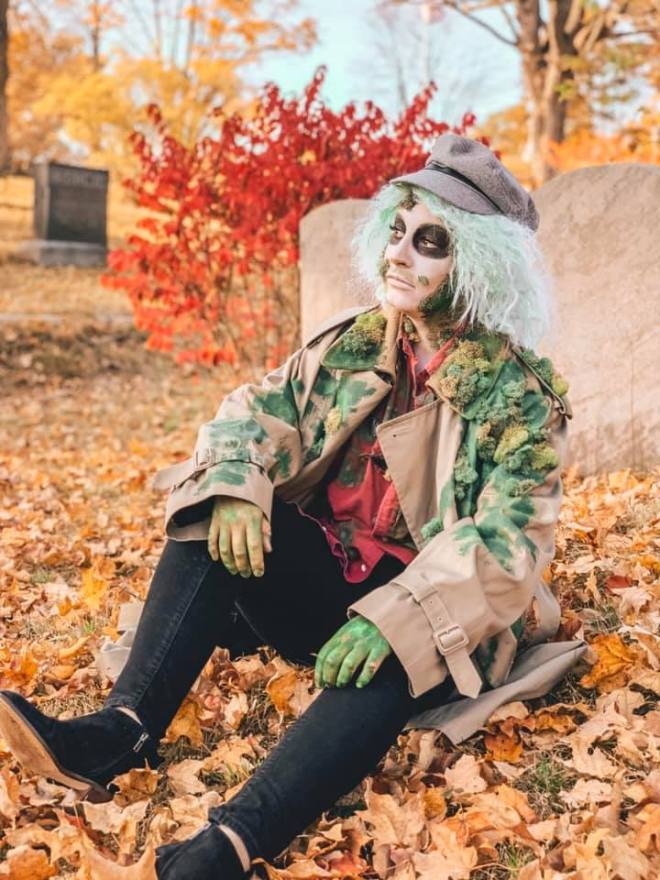 My qualifications? Ah. Well…
I attended Juilliard…
I’m a graduate of the Harvard business school.
I travel quite extensively.
I lived through the Black Plague and had a pretty good time during that.
I’ve seen the EXORCIST ABOUT A HUNDRED AND SIXTY-SEVEN TIMES, AND IT KEEPS GETTING FUNNIER EVERY. SINGLE. TIME. I SEE IT…
NOT TO MENTION THE FACT THAT YOU’RE TALKING TO A DEAD GUY!
NOW WHAT DO YOU THINK?
You think I’m qualified? 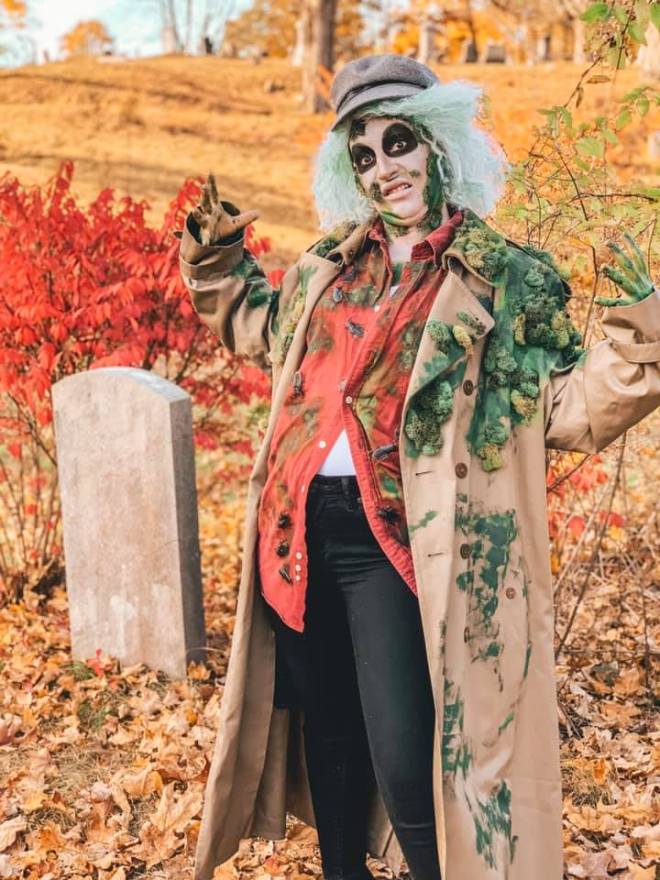 OK so this is a costume I’ve wanted to do for like, ever, but I wasn’t really sure if I could commit to the makeup. This year, I decided to just go for it.

I built this costume from scratch, relying on a few pieces from The Salvation Army to complete the look. The trench coat, red shirt and hat were all purchased there. I used a sponge to dab several different shades of green paint all over them, and hot glued real moss on top to mimic the look of mold/mildew.

I then glued rubber cockroaches in strategic locations on both the jacket and the shirt.

I supplemented the costume with black booties and black jeans from my own wardrobe.

The wig was purchased at Party City, and is actually part of an Albert Einstein set. I used two different colors of green dye to color the wig, then shampooed it two or three times to fade the color.

The makeup was a really fun challenge. I practiced a handful of times, and even went into CVS  painted up like this (sans wig) one night, because I realized I’d run out of makeup remover. The cashier asked if I was in a play…as a rock…I said yes.

I started by using white face paint (purchased at Target in the Halloween section) to cover my entire face and neck. Once dry, I coated it in a layer of white eyeshadow, which I floofed over my face with a regular face powder makeup brush (is there like, an actual term for that particular brush? IDK.) I also went over my lips with the powder, which added to that “dry, crusty and dead” factor.

I then used the same paint from earlier and dabbed it on my face with the sponge, then used eyelash glue to add the moss. I accented these spots with different shades of green eyeshadow, using short, quick strokes. I brushed a bit over my eyebrows, too.

Then came the eyes.

Using the black face paint from my Target pallet, I drew large round circles around each eye/eye socket, then filled them in. I layered the face paint several times, and even went back over it with matte black eyeshadow.

What do you think? Did I nail it?

Actually. Don’t answer that. I know I totally fucking nailed it 😉